So popular and unmistakable that a town square was named after it. In Genova, the Prà basil is worshipped.
PRÀ is one of Genoa’s districts located right behind the seaside in the western part of the city, in Prà’s greenhouses they cultivate the best basil for Pesto. 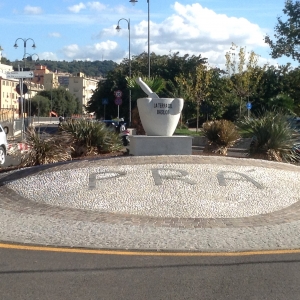 The plant originally came from the tropical regions of Asia and Africa, and then spread in the mediterranean basin and in almost all the warm countries of the world, but basil established a deep bonding relationship with the Ligurian territory, due to the climate and the attentions the ligurian people gave to it.

The Genoese basil is the most famous plant of its kind, it is cultivated in all the areas of the Ligurian region and has been recognized as Protected Designation of Origin (PDO) product in 2005 by the European Commission.

However not every basil plant is the same. The kind cultivated in the genoese district of Prà has peculiar characteristics: the microclimate conditions are particularly good, thanks to the proximity to the sea and the field exposed to the sun. The basil cultivated in this area is unique in aroma delicacy and in taste strength.

Here the basil il cultivated in soil, protected by greenhouses right behind the Prà coast, on terraced plains and hills near the seaside.

For centuries, the district of Prà has been part of the Capitanato of Voltri, and was not just a rural area, but also an industrial one. This territory was famous for the production of paper, because its people exploited the the differences in energetic potential, due to the numerous amount of water courses that went trough its lands. Beside the paper mills, at the end of the 19th century, the first greenhouses to cultivate basil were born.

These greenhouses spread among the Prà villas, small farms that sorrounded buildings were the administration of the rural activities was managed.

During the last century, the San Giorgio factory provided a fundamental resource to the development of this kind of crops: the carbon coke, a by-product of the siderurgic industry that was sold at a very cheap prize. This material allowed the heating of greenhouses and a significant production of ash, that came useful in order to transform the acid soil of Prà into an alkaline one. The history of the manifacturing activities and of the basil cultivation ften became entwined.

Generation after generation, many Prà families carried the legacy of the traditional cultivation of basil and, in honor of their work, our Pesto Lavezzari is only produced with Prà basil leaves.